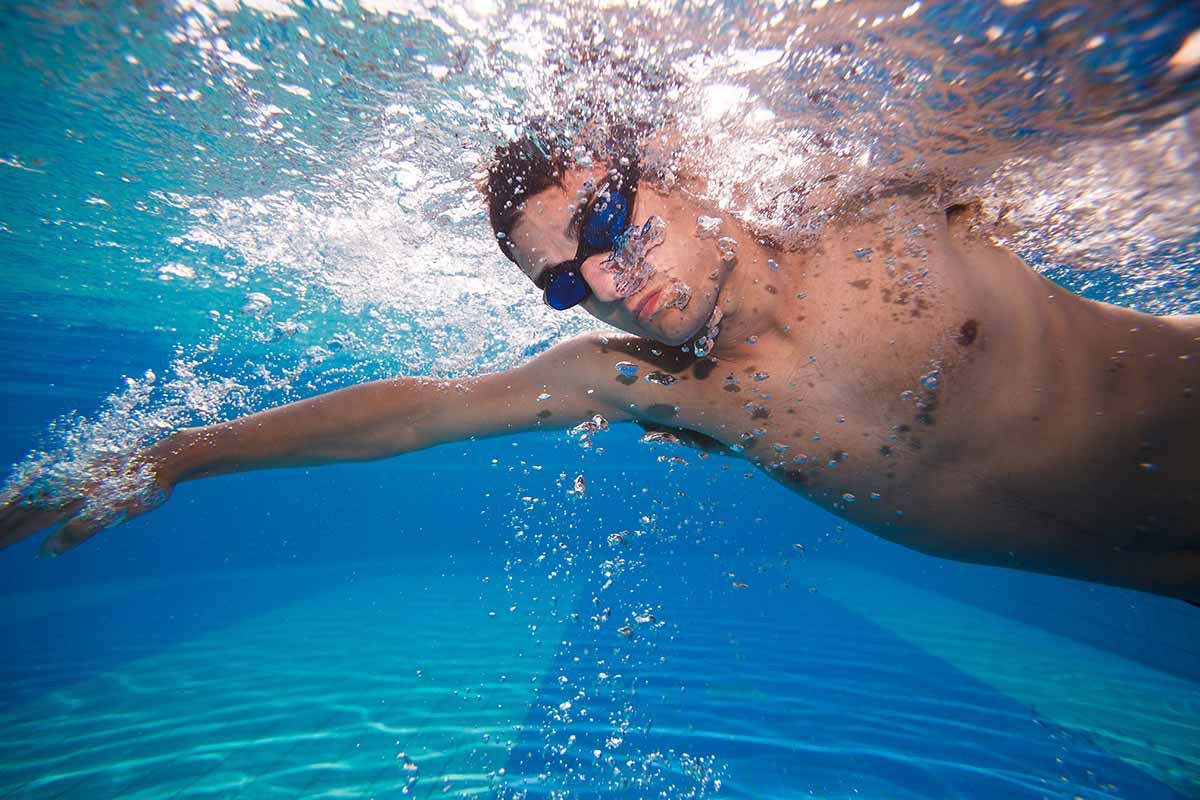 Swimmers of all skill levels contend with muscle fatigue while practicing, training, or just working out, though less experienced swimmers are more prone to faster burnout. It’s not necessarily because of lower stamina—though this usually factors in—but also because of less refined technique. Nobody likes to cut their pool sessions short, and of course we all like to see ourselves exceeding previous performances.

Here are a few tips to help stave off fatigue longer while you’re in the water.

You don’t expend energy while gliding through the water like you do while engaged in a stroke, of course, so maintaining your glide for as long as possible helps maximize how long you last. Optimizing your glide is also a generally beneficial way to develop more control over your swim rhythm and techniques. Count your strokes for the length of the pool, then work on reducing the number with a longer glide.

Beginning swimmers typically lift their heads up out of the water to breathe, but even more experienced swimmers are prone to improper head positioning. Often, they angle it stiffly, causing the lower body to sink. These sorts of mistakes cause you to expend extra energy by working muscles harder and creating additional drag, ultimately tiring you out sooner. Focus on training yourself to look down and only turning your head slightly to take in air.

Even if you favor or are working on one particular stroke, you’ll prolong your energy if you alternate between a few strokes. While there’s certainly overlap, different strokes work different muscles to varying extents. Sticking with the same motions, uninterrupted and for extended periods, tires you out efficiently. When you start feeling the drain, change strokes for a while; don’t change too often, just when you need a rest. The backstroke, which gets your face and chest out of the water, is useful for catching your breath and resting overworked muscles.

As with changing your strokes, switching periodically between predominantly generating propulsion with your arms and your legs helps extend your swimming stamina. As you begin to tire, you’re prone to working harder with your arms. Fight this natural tendency so you can give your upper body a break, working your legs more instead. If you’re a beginner, remember: the real power comes from kicking at your hips, not your ankles.

Long Strokes for a Long Swim

Many swimmers start shortening their strokes as they begin to feel fatigued. Generally, hand entry into the water remains correct, but hand exit comes too soon, well before proper arm extension. This diminishes pull, and with it the distance traveled with each stroke. So, although you want to be working less because you’re tired, you actually start having to make more strokes to advance the same distance. Don’t fall into the short-stroke trap after you’ve been in the water for a while.

Find a store near you that carries our products